Dad and I were driving home from a special gathering where he addressed the parents of troubled teens.  At that time dad was a chaplain at the Gatesville State School for boys, a minimum security prison whose goal was to rehabilitate those seventeen and younger through rigorous education and hard manual labor. We lived on campus while I was in the 4th and 5th grades.  I occasionally shadowed my dad as he walked from unit to unit visiting with young men who had made less than stellar choices very early in life.

This particular gathering was to encourage and equip parents who had sons and daughters playing in a dangerous and risky sandbox.  Their teens were a step away from being our next door neighbors. I was always amazed, proud also, at how fearful and exasperated parents drew strength from dad’s encouragement and wise counsel.

Dad’s pink rambler was moving along nicely until the heavens opened and unleashed a rain that was more like Niagara Falls.  The force of the rain and sheer amount on the roadway sent us into a harsh hydroplane swerve.  Along with the endless volume of water was a driving wind, rolling thunder and pops of lightening that not only lit up the sky but sounded like God was cracking a gigantic whip.

There were no laws or seatbelts in the Rambler that confined me so it was easy for me to bolt into the floorboard in a fetal position. I had been through enough atomic bomb emergency drills at school to know how to hit the floor, roll up in a ball and cover my head.

I was petrified.  The storm came upon us out of the blue and unleashed her fury with a vengeance. There was no warning. There was no long range weather forecast or radio severe storm warning. We were on our own.

We were the only car on a dark, two lane desolate road in the middle of the hill country. Thank goodness I went to the bathroom before we left because I was scared to death. My 10 year old brain was on overdrive, trying to process a nightmare experience that felt like it would never end.

I suspect some of you today feel like the 10-year-old version of me hunkered down in the floorboard of my dad’s pink rambler.  Though there had been conversation and forecasting of the Covid-19 pandemic, few of us saw it coming with such a dramatic impact.  Few of us grasped the mental and emotional drain of “physical distancing” or “stay at home” directives.  The economic shock waves have sent many of our financial portfolios into a hydroplane swerve and we are still trying to gain control of the wheel.  Though there have been many positive elements and learnings from this whole experience, the economic uncertainty alone, much less the fear of fighting off the infection, are for many a nightmare experience.

The horrendous storm tracked us all the way home. For miles dad steadily drove at 10 mph, continually fighting the wind and torrential rain whose goal seemed to be to drive us off the road. Dad was intently focused on the road but he spoke to me continually with a reassuring voice.  At one point he said, “Rickey, keep your eyes on me.  Don’t be distracted by the lightening or the sound of the wind and rain, keep your eyes on me.”

I looked up at dad, and though his eyes were dialed in on the road, his face was no different than when he came into my room to tuck me in at night.  I saw calm, confidence and a reassuring love.  Eventually he broke out into song and invited me to join in. We sang everything from “row, row, row your boat” to “yes, Jesus loves me.” We talked baseball, summer vacation, how good that hot shower was going to feel when we got home and imagining how my mom and sisters were holding up since we “men” weren’t there to protect them.

The storm never let up. It was still howling and raining enough to cause Noah’s ARK to float.  We both got drenched as we ran to the front door but we were both laughing and teasing each other.  Before walking in, dad gave me a big old bear hug then took me to the ground as we ended the night with a father/son wrestling match on the front porch.

The storm was as intense as when I first curled up in fear on the floor board of dad’s pink little rambler, but I felt totally different. Why?

After the invitation, I never took my eyes off dad.

“I lift up eyes to the mountains, where does my help come from? My help comes from the Lord, the Maker of heaven and earth.”  Psalm 121:1-2 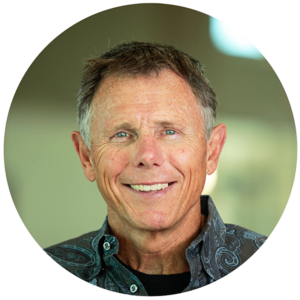 Married to Dallas 41 years, three sons: Justin, Jacob, James, three daughter-in-laws: Lara, Summer, and Corinne, one grand-daughter: Lennyx, and four grand-dogs. He is a son, brother, sports enthusiast, cross-fitter, lover of life, people, especially youth and children, most of all a sinner saved by grace.